Article published by HubCitySpokes. Can be found online in its original format here.

You’ll find Hotel Indigos in metropolitan cities around the world – New York, Bali, Hong Kong, Warsaw – but since its 2004 inception, the hotel has lacked a presence in Mississippi.

Mississippi’s first and only Hotel Indigo is set to open its doors to the public on July 17 as the anchor for The District at Midtown, the mixed-use development headed up by Rob Tatum at the former site of the Elam Arms dormitory in Hattiesburg.

“It’s really cool,” hotel general manager Rhonda Cunningham said. “All of the team is really excited to be a part of this, especially with it being the first one in the state.

“This is such a beautiful hotel with so much custom-detailed work – there’s nothing else like it.”

The five-story boutique hotel, which is located at the corner of South 31st Avenue and Chevy Chase Drive, will offer 100 rooms. As each Hotel Indigo bears the theme of the neighborhood in which it’s located, the Hattiesburg location will pay homage to the Hub City’s timber and rail industry, as well as the University of Southern Mississippi. Each room will feature a portrait of Hattiesburg lumber magnate W.S.F Tatum, who is Rob Tatum’s great-great grandfather and one of Hattiesburg’s first mayors.

“Being a boutique hotel, we have Aveda soaps, shampoos and body wash, and higher-end furnishings throughout,” Cunningham said. “We have a really nice, large fitness center with free weights and the typical machines, but also a rowing machine.

“We have a beautiful executive boardroom that’s got very high-end chairs – it’s very up-scale, very comfortable. We’ve got murals throughout that are custom to the railroad and timber industry, and are very artsy.”

Guests can also visit Brass Hat, the hotel’s restaurant/bar reminiscent of a 1930s railroad dining car. The menu at Brass Hat will be focused on tapas, small plates and specialty items.

“Most of the items we put on the menu are unique to anything in this area, just so we’re not offering the same menu items as other restaurants,” Cunningham said. “And there’s a huge focus on mixology, and we’ll also have live music from time to time. We really want the restaurant and bar to be its own little island.

“We want a lot of the locals to come by and hang out and grab a drink after work, especially being across the street from the University of Southern Mississippi, and we want the residents of The Avenues to stop by. A lot of my neighbors have already told me they’re excited to stop by, so we want to bring that vibe to the neighborhood.”

The hotel will serve a wide range of local products, including Grin Coffee – brewed in Hattiesburg by Tommy Teepell – Country Girls Creamery, Bee Gold Honey and some local craft beers.

Hotel Indigo officials also have partnered with Hattiesburg restaurateur Robert St. John to serve some of his fare from the soon-to-be-opened Midtowner and Midtown Donut. The hotel’s breakfast items will be served through The Midtowner, and St. John also will store some of its grab-and-go items and handle the hotel’s room service for breakfast.

“With a boutique hotel, it’s not your normal complimentary, run-of-the-mill breakfast, because it’s a full-service restaurant,” Cunningham said. “And there was no reason for us to open for breakfast when The Midtowner has such a unique following.

“One thing that’s unique about Hotel Indigo is that we tell a neighborhood story, and part of that identity is that a certain percentage of the items are locally sourced.”

Although there’s no shortage of hotels in Hattiesburg, Cunningham is confident the uniqueness of Hotel Indigo will help carve its on niche in midtown. 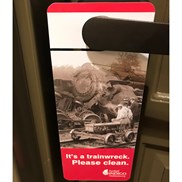 “I will say that I’ve opened and managed other hotel properties, and been involved with hotels here since 1997,” she said. “This is my third hotel opening, and this is by far the most special, just because it’s so unique.

“It’s not your normal chain, box hotel. We’ve customized all the features and the décor, and Hotel Indigo is ‘function within a framework.’”

Tatum said the hotel staff will hold a grand opening at some point, but the date for that hasn’t been set yet.

“It’s been a long time coming – July 17th will be a big day for the hotel,” he said. “We’re excited that it’s opening before football season and school gets back in session.

“We will (do a ribbon cutting), but we’re going to get open and get all the kinks worked out before we do a public opening event.”