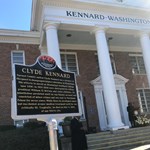 Jackson, Miss. (Feb. 2, 2018) – A new marker on the Mississippi Freedom Trail memorializes Clyde Kennard, the first African-American student known to apply for admission to The University of Southern Mississippi.

“Clyde Kennard’s quest for equality and dignity played a significant role in the civil rights movement in Mississippi,” said Visit Mississippi Director Craig Ray. “The Mississippi Freedom Trail allows all Mississippians and visitors to remember his sacrifice and honor his legacy.”

A Forrest County native and U.S. Army sergeant who served in Germany and Korea, Kennard returned to Mississippi in 1955 to run the family farm. When he sought enrollment at then-named Mississippi Southern College to complete his degree, the school denied his application.

Kennard returned to enroll in September 1959 and was again denied admission. He was arrested on charges of excessive speeding and illegal possession of whiskey when he returned to his car, despite being a known and devout Baptist who never drank alcohol.

The following year, Kennard was wrongly convicted of accessory to burglary and sentenced to prison. A diagnosis of cancer led to his release from the Mississippi State Penitentiary in spring 1963, after protests from civil rights leaders. Kennard underwent surgery but passed away on July 4, 1963. Later investigations proved Kennard’s innocence.

In 1993, USM dedicated Kennard-Washington Hall on the Hattiesburg campus to Kennard and Walter Washington, the first African-American to receive a doctorate from the university. The Mississippi Senate and House of Representatives adopted a resolution honoring Kennard in 2006, and then-Governor Haley Barbour issued a proclamation declaring March 30, 2006, as “Clyde Kennard Day.” The Forrest County Circuit Court exonerated him the same year.

“The Clyde Kennard story is one of the most difficult chapters in the history of our state," said Dr. Leslie-Burl McLemore, chairman of the Mississippi Freedom Trail Task Force. “I’m glad to see this marker being erected on the campus of USM in tribute to his life and legacy.”

Launched in 2011, the Mississippi Freedom Trail commemorates the people, places and events of the civil rights movement. For additional information, please visit www.visitmississippi.org.

Download the Hattiesburg Freedom Summer Trail brochure or pick one up at the Visitors Center to guide you along the journey.