HATTIESBURG (July 23, 2018) — Anna McDaniel was crowned the 2018 Mississippi Miss Hospitality Saturday evening at the Historic Saenger Theater in Downtown Hattiesburg. With 31 contestants competing for the title, McDaniel was selected following the week of competition, which included one-on-one and panel interviews, speeches, on-stage interviews, and an evening gown component. 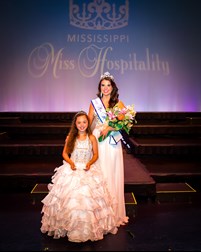 Selected as the 69th Mississippi Miss Hospitality, the winner serves as a goodwill ambassador foreconomic development and tourism during her reign. McDaniel will participate in numerous events throughout the state that highlight Mississippi’s tourism attractions and industries.


“I’m so excited about the year ahead. It is such an honor, privilege, and responsibility that I will not take lightly. I really believe in this program, and I want to spread hospitality and love, showcasing all that Mississippi has to offer. I also want to advocate to people my age to get them to come to Mississippi,” McDaniel said.

McDaniel, a native of Meridian, is a junior mass communications major at William Carey University.  She serves as the current editor-in-chief of the university newspaper, The Cobbler, and is a Student Government Association representative. McDaniel also auditioned on season fifteen of American Idol before competing for the title of Mississippi’s Miss Hospitality. She is the daughter of Brad and Lisa McDaniel. 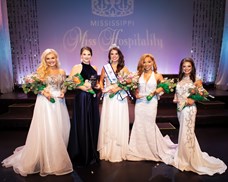 Mississippi’s Miss Hospitality works with local directors, contestants, and sponsors throughout the year to present the weeklong competition in Hattiesburg. In addition to competing and rehearsing, contestants participate in service projects and city tours, along with teambuilding and leadership activities.

“Mississippi Miss Hospitality travels throughout the state to share tourism assets, business advantages, culture, and goodwill to organizations and leaders during her reign,” Jennifer Parsons, program coordinator, said. “Anna joins a network of talented women who come before her in this role, and we are grateful to our local directors for their dedication in promoting the program and preparing excellent representatives for the state competition.” 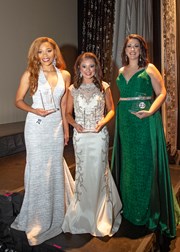 Serving alongside McDaniel at official events and appearances will be Kennedy McDaniel, as Mississippi’s Little Miss Hospitality. Contestants locally selected a Little Miss to be on stage with them during competition week. Kennedy is 10 years old and is McDaniel’s little sister.

Additionally, a number of other scholarships and awards were given out during competition.

The Southern Miss Image Center awarded the Most Photogenic scholarship to Carson Avery of Amory. 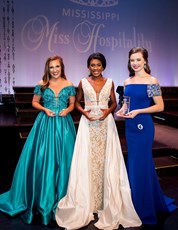 The program awards one young woman a top ad sales scholarship, but this year, there was a tie between two contestants: Madalyn Ogelsby of Lincoln County and Tavia Moore of Stone County.

New this year, the 31 contestants were provided a social media challenge starting one month before competition week that highlighted their hometowns, the program’s sponsors, and more. This year’s social media scholarship winner, which is awarded by the Mississippi Tourism Association, is Kaitlyn Warden of Ellisville.

Nominated and voted on by her peers, the program recognizes one young woman as the Spirit of Hospitality for her supportive, welcoming, and kind behavior throughout competition week. This year’s winner is Kathryn Stringer of Starkville.

During the Women of Distinction Farewell Brunch for contestants, their families, and local directors on Saturday morning, two honors were given.

The 2018 Volunteer of the Year was Mendenhall’s local director Nina Grubbs, who has served in shaping and supporting young women from the area for more than 10 years. 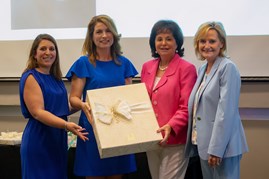 The program also honored its first Woman of Distinction, Bonnie Warren. Warren is credited with bringing the competition to Hattiesburg 21 years ago and has been actively involved each year since, supporting not only the program from behind-the-scenes but also inspiring and encouraging contestants and winners. Currently, she is the director emeritus for the program.

For more information or to request Mississippi Miss Hospitality at an event, visit misshospitality.com or the program’s Facebook page.

Presented by the Hattiesburg Tourism Commission (VisitHATTIESBURG), the Mississippi Miss Hospitality program brings together the best and brightest young women to annually compete forthe state title. Contestants must be young women between the ages of 18 and 24, enrolled in college, and represent their hometown. The program supports more than $100,000 in college and university scholarships. The winner serves a full year as the state’s goodwill ambassador fortourism and economic development by traveling and promoting Mississippi’s assets to visitors and industries.