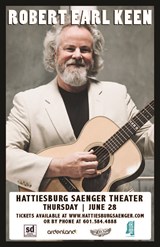 The two summer concerts are being produced by Ardenland, an entertainment company specializing in concert promotion with a solid history of connecting musicians to venues and cities across the country.

“We are incredibly excited to be bringing more concerts to the Hattiesburg area. The level of support received from the City of Hattiesburg, local businesses, and fans all across the Pine Belt has been amazing,” Arden Barnett, owner of Ardenland, said.

Hattiesburg Mayor Toby Barker believes the addition of these concerts is a step forward in growing the city’s reputation as a musical destination.

“We aim for Hattiesburg to become a premier destination in the Gulf South for top-notch artistic talent,” said Hattiesburg Mayor Toby Barker. “Bringing Robert Earl Keen to our city represents an incredible opportunity for us to show that we can fill our largest music venue. I encourage all of Hattiesburg to make plans to be at the Saenger on Thursday, June 28.”

Keen, who is a country and Americana musician, has released more than a dozen records over the course of a three-decade career. In 2001, he released Gravitational Forces, followed by Farm Fresh Onions (2003), What I Really Mean (2005), The Rose Hotel (2009) and 2011’s Ready for Confetti. In 2012, Keen was inducted into the Texas Heritage Songwriters Hall of Fame, along with the late Van Zandt and Lyle Lovett. 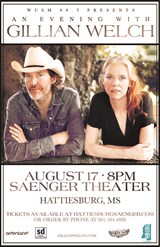 “With more than 400 local live music events each a year, Hattiesburg is widely-known for its music scene. We are thrilled to welcome Robert Earl Keen to HBURG and all of his fans as well. We encourage them to stay an extra night to enjoy our creative vibe, restaurants, attractions, and welcoming hotels,” Marlo Dorsey, executive director of VisitHATTIESBURG, said.


The second installation of the Summer Concert Series is a performance by Gillian Welch, with special guest Dave Rawlings, on Friday, August 17 at the Hattiesburg Saenger Theater.


Tickets for both performances are on sale now online via HattiesburgSaenger.com or by calling the box office at 601.584.4888. Tickets for the Robert Earl Keen performance range from $34 to $47 per person. Doors open at 7 p.m. the night of the event.

The concert series is presented by Ardenland and Stokes Distributing, in cooperation with VisitHATTIESBURG.