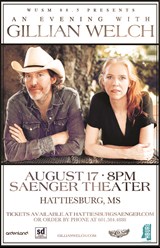 HATTIESBURG (Aug. 10, 2018) — Americana music enthusiasts have another concert option in Hattiesburg as singer-songwriter Gillian Welch takes the stage at the historic Hattiesburg Saenger Theater for the second installment of the summer series on Friday, August 17 at 8 p.m.

The summer concert series is being produced by Ardenland, an entertainment company specializing in concert promotion with a solid history of connecting musicians to venues and cities across the country. Earlier this summer, Ardenland brought country artist Robert Earl Keen to Hattiesburg for an almost sold-out performance at the Saenger.

“We are incredibly excited to be bringing more concerts to the Hattiesburg area. The level of support received from the City of Hattiesburg, local businesses, and fans all across the Pine Belt has been amazing. We had a great turn out at the Robert Earl Keen performance and anticipate a large crowd for Gillian Welch, too,” Arden Barnett, owner of Ardenland, said.

Gillian Welch performs with her musical partner and guitarist David Rawlings. Together, their musical style combines bluegrass, country, and Americana. They have released seven critically-acclaimed albums and received numerous Grammy nominations. Albums included Revival, Time (The Revalator), The Harrow and the Harvest, and most recently Soul Journey, which hit stands on Aug. 10, 2018. Additionally, Welch was an associate producer and performed on two songs of the O Brother, Where Art Thou? soundtrack. She also appeared in the film attempting to purchase a Soggy Bottom Boys record.

“Hattiesburg is known for its music scene with more than 400 local live music events each a year to keep visitors and locals entertained. We are thrilled to welcome Gillian Welch to HBURG and all of her fans as well. We encourage them to stay an extra night so they can enjoy our creative vibe and the many offerings Hattiesburg has,” Marlo Dorsey, executive director of VisitHATTIESBURG, said.

Tickets for the performance are on sale now online via HattiesburgSaenger.com or by calling the box office at 601.584.4888. Tickets for An Evening with Gillian Welch range from $30 to $45 per person. Doors open at 7 p.m. the night of the event.

The concert series is presented by Ardenland and Stokes Distributing, in cooperation with VisitHATTIESBURG and WUSM-FM 88.5.