During COVID-19, my wife, Sophie, and I have missed traveling. But on a recent Sunday, we set the cruise control and headed two hours south, down Highway 49, for an overnighter in Hattiesburg.

There are two subjects that come up in conversation that excite me more than just about anything: Southern Prohibition Brewing Company and the Hub City! 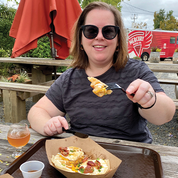 So naturally… first stop - SoPro - and their Sunday brunch from on-site food truck vendor, Art of Roux. On this day, the menu consisted of a variety of topped waffles. We didn’t go full-in and get all four that were offered. Three would suffice. But, out of the traditional chicken and waffle and peanut butter and banana waffle, we both agreed, the bacon, egg and cheese waffle was the distinctly-different winner. There’s something about savory and sweet that calls my name. 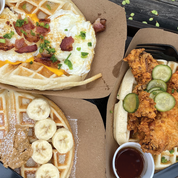 Did I mention the beer? With rotating taps of one-off creations – IPAs, stouts and other options – and their tried-and-true standards, Southern Prohibition is a surprising delight with each sip. 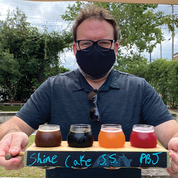 On the day we were down, we sampled a flight featuring Shine Barleywine, Cakewalk Stout, the PBJ Fluff Sour and the Mogwai Ornaments Stout (my favorite).

Seeing downtown Hattiesburg really come to life as it has, The Lucky Rabbit is a fun and funky addition. Packed into an old warehouse within walking distance of SoPro, you’ll find vintage merchandise alongside new and trendy items, along with a rotating themed “set.” As a fan of NBC’s “The Office,” I was giddy to see a replica of Jim and Dwight’s desks and Pam’s reception desk on our visit. The uncanny attention-to-detail poured into this recreation was a marvel to experience. And good news: The Lucky Rabbit will forego its once-a-month experiences in favor of an every weekend schedule! 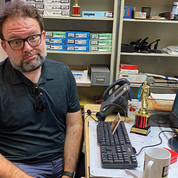 While we were downtown, we had to see what the hype was about with the city’s new “Pocket Museum.” The hunt for the location is part of the fun, so I won’t give it away. But the former window-in-the-back-of-a-storeroom, lined with three shelves, is a rotating curiosity. Themes have ranged from rubber duckies to “tools of the serial killer” and, more recently, paper arts like origami and paper dolls. The museum has gotten national media coverage - and rightfully so.

While the museum is a stand-alone gem, the alley surrounding it had us grinning from ear-to-ear. From miniature figurine “scenes” on top of utility meters to porcelain cats hanging out on pipes and balconies, you could spend a half hour (we did!) just trying to spot every little detail.

As we looked around downtown and beyond, it became apparent that Hattiesburg will soon be known for yet another calling card: public art. With several murals just finished in the past several months, it seemed freshly and creatively painted walls were at every turn. From the inspiring (Heidi Pitre’s work celebrating women’s suffrage) to the whimsical (Kelsey Montague’s fireflies you can “blow” away), we were in awe. Follow their public art trail Google map like we did to discover your own favorites. 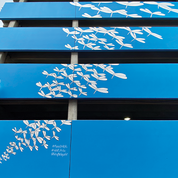 Our next stop was wild: The Hattiesburg Zoo. I must say, for its small size, this zoo at Kamper Park on Hardy Street packs a meaningful experience into a manageable footprint. We had been before, but like kids, our eyes lit up rediscovering the exhibits. We even took the train ride around the park to reacquaint ourselves with the layout first.

Of note, we enjoyed the Australian exhibit that allows you to be in the same space with kangaroos (!!) and the “I wish I was a kid again” ropes course (they wouldn’t let me climb on!) We can’t wait to get back here, because, an entirely new African animal exhibit will open this year.

By this time, we were ready to check in to our room and The Hotel Indigo – after several stays here – never disappoints. The rooms are well-appointed, thematically decorated with the area’s history, and access to the campus of The University of Southern Mississippi, Sophie’s alma matter, is a short walk.

It was there we strolled to the center of campus – Shoemaker Square near the chapel - to see the new Oseola McCarty bronze sculpture, beautifully created to honor the late laundress who gave her life savings of $150,000 to the school. There’s even a chair as part of that sculpture so that you can take a load off, right beside Ms. McCarty. Maybe that level of generosity will rub off on anyone who dares to sit there. 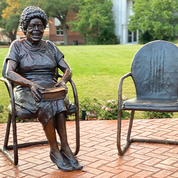 With all the trekking for art, antiques and animals, we couldn’t resist the lure of homemade burgers and fries (and shakes) for dinner at Ed’s Burger Joint. We’re soon to get a location of this Robert St. John gem in the Fondren neighborhood of Jackson. Until, then, this will give us our fix. Sophie got a chicken sandwich, we both had fries and rings, and neither of us left hungry.

After a restful night, we checked out from the hotel and headed downtown to The Depot Kitchen and Market. I had been told, the Bru’s Bowl was the go-to, and, as a “meat and potatoes” kind of guy, I was not disappointed. A cheddar biscuit, topped with sausage gravy, bacon, scrambled egg and cheddar cheese? Sold! Sophie went with a roasted veggie bowl, and, I must say, I’m tempted to go that route on the next trip. The iced coffee, too, was just the go-juice I needed for the ride home.

Looking for a quick day trip or an overnight getaway? I’ll choose Hattiesburg almost every time. We can’t wait until we’re in the Hub City again soon! 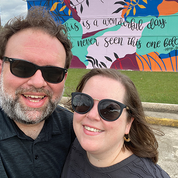 Paul Wolf is the Content Marketing Manager for Visit Jackson. He and his wife, Sophie, are the owners of Find It In Fondren, a brand serving Jackson’s Fondren neighborhood.